I took this at the City Center New Years eve/ day fire in 2014.  Blanche stayed up all night, we were burning tenken reports.  And it’s even more special because it was the day after Steve Stucky had died.  At least I was on an airplane coming back from Texas when I read the news on his blog and I cried on the plane.  Then I got to City Center and we were ringing the Densho for him and then had this wonderful New Years fire. I stayed up part of the night and took this picture but Blanche stayed up way past the time I went to bed. – Hilda Ramos City Center resident 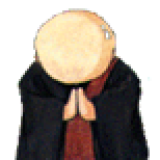 One reply on “From Hilda Ramos”

Blanche requests no visits or calls at this time.

or email daigan@queerdharma.net with Blanche as the subject.